The Most Useful Bathroom Shower Ideas

There are almost uncountable types of bathroom shower ideas around the world. Mostly people like a little flair in there shower style, so for this purpose we have placed some of the best type of shower ideas below.

The first type of bathroom shower design, which I am going to tell you, is a type of Aluminum and glass shower with an enclosure. This enclosure is created using glass panels, which is attached to an aluminum frame. This shower enclosure is then surrounded with walls fitted with metal grey tiles, the blend of the metal with the tiles and clear glass gives a slightly new look.

This is another type of bathroom, which will have a simple, but a classy look. The contrast will have a white and grey colour and have grey colored cabinets, white colored sink and a stool. While the shower will be attached on the roof of the bathroom and the shower, area will be give covered with glass panels and with a little mix of black and white tiles. The bathroom will overall be covered with white tiles.

One bathroom shower idea is that most people would first think twice before implementing this idea. The idea uses a simpler type of shower attached on to the side of a wall and the shower can be moved as it is connected with a pipe. To enhance the effect, dark grey tiles will be attached only on the floor, while the walls will be covered with sea blue colored checkered tiles. To add more effect a sitting area will also be made in the shower, which will be connected, which will be covered with light grey tiles and the overall shower area will be covered with glass panels. This type of bathroom shower idea is indeed one of its kind as it reflects quite a sophisticated design with a little reflection of the sea.

If your favorite place for remove your stress is the shower than you will definitely love this type of idea. The idea consist of a rainfall shower head adjusted on the ceiling and the whole shower area covered with grey tiles which is an amazing combination for a rainfall type of look. This will definitely have a very refreshing and a new type showering experience for you.

A newer and modern method using the inspiration of palaces is this luxurious bathroom, the idea is to decorate the shower area with multicolored tiles and the use of a free stand tub having a double shower and the bath tub placed just beside a window a beautiful and natural look. The flooring will be of light hardwood floor, which gives a nice finish to the overall look of the shower.

This type of shower uses alcove shower head on the ceiling while the whole bathroom walls are covered with beige walls using large granite looking tiles and a stone slab with an under mount sink and cabinets attached on the side of the sink. The shower area will be covered with curtains and a glass door to enhance the beauty of the shower.

This type of bathroom shower idea is best for mid-sized bathrooms where wooden doors and an under mount sink attached with dark wooden cabinets on its bottom. While the countertops are made of granite, there will also be a clove shower and a two-piece toilet.

This is an example of a traditional bathroom where there is a white and blue colored contrast while the under mount sink is built beside the shower and has white cabinets and a mirror is attached in front of the sink for a perfect view. The Shower has light blue tiles and a glass window, which will provide an amazing experience.

This shower uses the sophisticated idea of hardwood cabinets attached under an under mount sink while the wooden cabinets are of a medium colored wood and has a toilet and a shower area having flat panel cabinets and a rainfall shower head and the walls are painted in light brown colour. 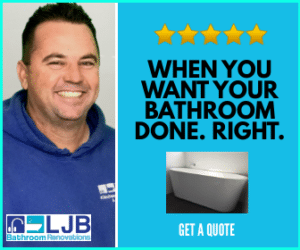